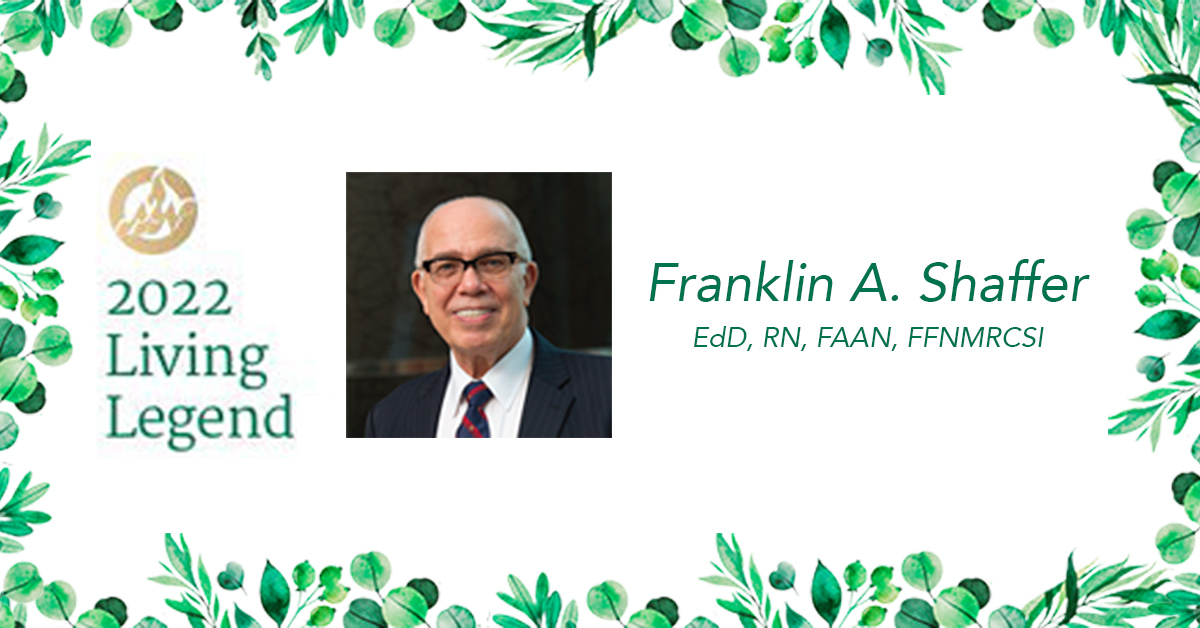 President and CEO Dr. Franklin A. Shaffer Honored as ‘Living Legend’ by the American Academy of Nursing

PHILADELPHIA—The American Academy of Nursing (Academy) has announced that Franklin A. Shaffer, EdD, RN, FAAN, FFNMRCSI, CGFNS International President and Chief Executive Officer, is one of 2022’s Living Legend Honorees. Each year, the Academy recognizes a small group of fellows as Living Legends, one of the highest honors in the profession, acknowledging their extraordinary contributions to nursing, sustained over the course of their careers.

Throughout his 60-year tenure as a nurse, Dr. Shaffer has made incredible global efforts to transform the nursing workforce through his leadership. His progressive and varied career has seamlessly interconnected clinical practice, administration, education, research and consultation, regulation, credentialing, standards and quality, and global collaboration.

“Dr. Shaffer is a true champion of the nursing profession whose work has improved the quality of care for countless patients through his global efforts to enhance and expand nursing through the advancement of education,” said American Academy of Nursing President Kenneth R. White, PhD, AGACNP, ACHPN, FACHE, FAAN. “On a personal note, I am pleased to celebrate Dr. Shaffer as he serves as an inspiration to underrepresented individuals in nursing, including men, and have seen the impact of his work personally throughout the decades of his career.”

After completing a three-year nursing diploma program at Mercer Hospital School of Nursing in 1965, as its first male graduate (and a first-generation student), Dr. Shaffer was a trailblazer who went on to earn a baccalaureate degree in nursing from East Stroudsburg University in 1975, as well as two masters’ and a doctoral degree in nursing education and administration from Teachers College, Columbia University in 1978, 1979, and 1983, respectively. A veteran, he reached the rank of 1st Lieutenant and Head Nurse in the U.S. Army.

“Being recognized as a Living Legend by the Academy is an honor of a lifetime and the true capstone of my career. My 60 years as a nurse has been nothing but a labor of love, and I thank all of those who have been a part of my journey” said Dr. Shaffer. “It is a privilege to join the ranks of some of our profession’s “greats” including many of my colleagues, mentors, and dear friends.”

Dr. Shaffer’s career trajectory has improved the lives and image of nurses, whether through academics or work in sectors outside of mainstream nursing, from travel nurses to migrating and foreign-educated nurses and refugees. His dedication to improving outcomes has challenged norms in the profession and his philanthropic efforts have supported numerous nursing institutions. At the end of this year, Dr. Shaffer will be retiring as President and CEO of CGFNS International, Inc., a position he has held since 2011.

History will recall Dr. Shaffer as a trailblazer, innovator, global citizen, and advocate for the most vulnerable within and beyond the nursing profession, as his legacy was built upon his philanthropy, his innovative contributions to advance nursing on the world stage, and his strategic leadership. Even though he is retiring from CGFNS International, his impact to nursing and global health is unlikely to wane, and we look forward to seeing what his future endeavors hold.

Join us in congratulating Dr. Shaffer on his career achievement and recognizing his immeasurable impacts and contributions to the nursing profession, policy, and public health around the globe!

About CGFNS International, Inc.
Founded in 1977 and based in Philadelphia, CGFNS International is an immigration-neutral not-for-profit organization that is proud to be the global leader in helping foreign educated nurses live and work in their country of choice, having served over four million nurses from 200 countries, and is internationally recognized as the world’s largest credentials evaluation organization for nursing. CGFNS International is an NGO in Consultative Status with the United Nations Economic and Social Council (ECOSOC) and is a member of the Conference of NGOs in Consultative Relationship with the United Nations (CoNGO).

About the American Academy of Nursing
The American Academy of Nursing serves the public by advancing health policy and practice through the generation, synthesis, and dissemination of nursing knowledge. Academy Fellows are inducted into the organization for their extraordinary contributions to improve health locally and globally. With more than 2,900 Fellows, the Academy represents nursing’s most accomplished leaders in policy, research, administration, practice, and academia.